Some Toastmasters have gone above and beyond the call of duty and touched the lives of people around them. This is a space to honour those individuals who've made a difference.
You don't have to die to be honoured here. We just ask that you don't put yourself up here. If you've touched lives, those people whom you have influenced will want to recognise you for it.
After Jean Theron (the French man's name Jean that rhymes with John, not the English woman's name that rhymes with Gene) died, Erich Viedge ran an obituary for him in the District 74 newsletter. It drew many responses from people who remembered him and his achievements.
When Kim Boon wrote this tribute, Viedge started this "heroes" page for Jean and people like him.

As a close colleague of Jean Theron when I was a member of Toastmasters International, District 74 until I returned to live in England in 2003, I was very saddened to learn of his death in November 2006.
I decided to search the wealth of TM materials I still have, as I was sure among it was the following (unedited) article, which Jean wrote some years ago, and I typed and preserved on CD for him.
Jean had hoped it would be accepted by TMI for publication in "The Toastmaster" magazine, but would not let me send it until he had added a few words about his AL and DTM awards (once obtained).
He never got round to writing those few words, so this article was never completed, much less sent to California. However, I sent it to Larna Anderson DTM, who I think was Lt Gov Education (District 74) at the time, and she thought it was inspirational.
Now, in seeking to have it published for the first (and only) time, it represents my last token of respect for an incorrigible, stubborn, but very enthusiastic Toastmaster, who gave his all to his club, the Western Cape, and District 74.
-- Kim Boon (Ex-member of Chuckle ‘n Chirp TM Club, #9671)

In Toastmasters, we are told to be proud of our achievements. I am proud of what I have worked for and achieved in Toastmasters, for which I have received recognition in the form of different certificates.
Instead of filing them or putting them away in a drawer, I had all of them framed and displayed them on my wall directly opposite my favourite armchair.
I just have to raise my eyes and I can see the recognition of what I have worked for and achieved. This wall display has not only helped me through difficult times, but has also motivated me to continue to achieve. I have been a Toastmaster for 8 years.
In that time I have learned that this is an organisation in which you need not be afraid of exposing your inner soul. You will always receive a supportive response.
Please don’t be a crybaby and succumb to self-pity. Not that I was not almost there a couple of times in the past few years. Self-pity is completely unacceptable.

I was a winner even though the going was toughEdit

My personal Toastmasters and business history over the last few years is as follows: 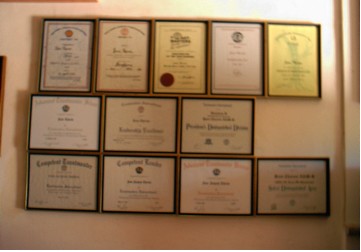 Looking critically at this, I was successful in Toastmasters, but my personal financial state was a disaster. Being a widower with all my children self-sufficient, and having no obligations to anyone but myself, where I was dependent on survival from the daily plate of food from my children, suicide entered my mind almost daily.
As a leader in Toastmasters I was riding the crest of a wave as Area and Division Governor, but as a self-supporting individual I was a dismal failure.
During this period I also underwent surgery to my right eye for a growth which proved to be malignant. Fortunately the closest organ that this malignancy could spread to was my brain – it would have been a “super duper” type of malignancy to find THAT!
When I hit these low spots in my life, I would look up at my wall display of Toastmasters certificates and say to myself, “You worked for those certificates and earned them honestly, so you can’t be as bad as you consider yourself to be. Hey, man, you are a WINNER!! That wall display proves it.”
I have a very symmetrical brain, and hate seeing anything out of balance. For that very reason I keep my wall display out of balance. I need another certificate to start my fourth row, before I complete my second. There must always be a space that has to be filled to obtain symmetry. I will never allow that to happen with my wall display. There must always be a challenge to fill those empty gaps, but before filling that gap, create a new unbalanced one. This will give the perfectly unbalanced wall display, which can be pursued for the rest of my Toastmasters life.
When I finally lay my head down, may it be said, “There was still one gap in his wall display. Perhaps he can balance it in the life hereafter.”

Retrieved from "https://toastmasters.fandom.com/wiki/Heroes?oldid=6494"
Community content is available under CC-BY-SA unless otherwise noted.